Eyes on the Street: A Roundup of New Bike Lanes, Part I

We’ve done write-ups of many bikeways the city installed this year as part of their effort to reach 100 miles of buffered and protected lane, including facilities on South Sacramento, South State, Vincennes, Clybourn, Milwaukee, and Washington. However, there were a few more new lanes I’d been meaning to check out, and some others that weren’t on my radar because the Chicago Department of Transportation hadn’t announced them on the bike program’s Facebook page. Recently, however, CDOT provided this list of bikeways they built this year: 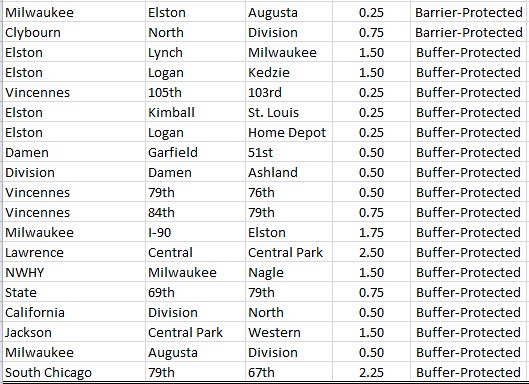 Yesterday, I took advantage of the gorgeous weather to check out some of the new lanes on the Northwest Side. In the near future, I’ll provide a roundup of the new South and West Side bikeways we haven’t already covered.

It’s worth noting that most of the bikeway mileage installed this year was simply upgrades to existing facilities — usually turning conventional bike lanes into buffered lanes. While these upgrades helped CDOT to reach their goal of installing 100 miles of buffered and protected lanes within the last four years, they didn’t actually expand the bike network or improve connectivity. On the other hand, buffered lanes are more comfortable to ride in than conventional ones, so it’s nice that non-buffered lanes are going the way of the dinosaur.

Moreover, CDOT has halved their mileage goal for the next four years to only 50 miles. Since there will be less pressure to quickly rack up mileage, maybe there will be more emphasis on building brand new bikeways, rather than simply upgrading old ones.

And perhaps a higher percentage of the new lanes will be physically protected – only 19.5 of the 103 miles of lanes installed under Mayor Rahm Emanuel have been protected. In addition, CDOT has stated that they plan to focus on improving connectivity and making intersections safer, which is good to hear.

Yesterday, I started out by riding the 2.50-mile stretch of buffered lanes, upgraded from conventional ones, between Central Park and Central in the communities of Albany Park and Mayfair. It’s always fun to check out this strip, a melting pot of Latin American, Eastern European, Middle Eastern, and Korean businesses. As is usually the case with new bikeways nowadays in Chicago, the lanes are generally marked through intersections, and the project also included new high-visibility, zebra-stripe crosswalks.

Next, I checked out the 1.5-mile stretch of brand-new BBLs on Northwest Highway between Milwaukee and Nagle in a Gladstone Park. This was one of few bikeways installed this year on “terra nova,” a location where no bike facility existed before. Along the way I spotted a wacky sculpture of a monster in someone’s back yard, constructed of old car parts.

After that, I returned to Milwaukee to check out one of the great missed opportunities of recent bikeway design. CDOT had proposed a complete streets project on the 1.75-mile stretch of Milwaukee between the Kennedy Expressway and the street’s northern junction with Elston. This would have involved turning the five-lane speedway into one travel lane in each direction, a turn lane, plus protected bike lanes.

Since the street has way too much capacity for the amount of motor vehicles it carries, an average of less than 20,000 trips per day, it has a high speeding and crash rate. The road diet would have calmed traffic with little impact on congestion. However, Jefferson Park residents – the same folks who have fought against transit-oriented development and a Pedestrian Street designation for the neighborhood’s business district – bitterly opposed the project, and it became an issue in the local aldermanic election.

Ultimately, CDOT was forced to severely water down the safety overhaul. They merely reduce Milwaukee’s turn lane from 14 feet wide to 10 feet, and slightly narrowed the four travel lanes, and added buffers on one side of the existing conventional bike lanes. Needless to say, this stretch of Milwaukee is still not a comfortable place to cycle. When I pedaled it yesterday, drivers seemed to be speeding as much as ever, perhaps encouraged by the silky-smooth new asphalt.

The protected bike lanes would have had the added benefit of shortening pedestrian crossing distances. At Milwaukee and Austin, it was a bummer to see kids from St. Tarcissus School having to hustle across five car lanes on Milwaukee in order to make it before the light changed. “It’s horrible out here,” the crossing guard told me. On the bright side, pedestrian islands will be installed on Milwaukee between the Kennedy and Elston next year, according to CDOT.

After refueling at the iconic Superdawg drive-in at Milwaukee and Devon, I headed southeast back into the city on Elston. Over the summer, 6.5 miles of Elston, almost its entire length, were upgraded from conventional to buffered lanes. The one remaining gap is between Webster and North, a stretch where a local industrial council fought against the upgrade, arguing that more cyclists on the street would get in the way of truck drivers. However, CDOT is moving forward with the project, pending the re-paving of the street.

I wrapped up the day’s fieldwork by test-riding new bikeways in Humboldt Park and Wicker Park. A 0.75-mile stretch of California between Division and North Avenue has been upgraded to BBLs. Although bike symbols haven’t been installed yet on the segment adjacent to the Humboldt Park green space, the satiny new pavement is a nice improvement. Hopefully the lanes will soon be extended another 0.75 miles north to meet up with Milwaukee.

The roughly half-mile stretch of Division between Damen and Marshfield has also been upgraded to buffered lanes. That’s a key improvement, because this busy Wicker Park retail strip gets a ton of two-wheeled traffic.