The Active Transportation Alliance is pioneering a new kind of biking event, a cross between a competitive race and a leisurely recreational ride, which could eventually turn into a significant fundraiser for their walking, transit, and bike advocacy efforts. The Kickstand Classic takes place in the morning of Sunday, September 25, in the suburban village of Bartlett, Illinois, southeast of Elgin. The starting line and post-race festival area will be located just south of the local Metra station.

The event will take place on a 4.8-mile, roughly trapezoidal course of village streets that will be rendered car-free for the occasion. While the ride is only open to people 16 or older, Active Trans director Ron Burke says it’s designed to be enjoyable for riders of all abilities, analogous to a 5K fun run. There will be three different heats for experienced, fast racers and road riders; confident cyclists who want to try their hand at racing; and casual riders who want to see what it’s like to pedal a bit faster, or just take a mellow cruise.

Burke says some of the inspiration for the event came from seeing his father organize the first 10K race in the small southern Illinois river town of Chester, home of Popeye creator Elzie Crisler Segar, when Burke was a kid. “Running races really began to happen for the general public in the 1970s,” Burke says. “For example, the Peachtree Road Race started in Atlanta in 1970 with 130 people and it now gets about 60,000.” 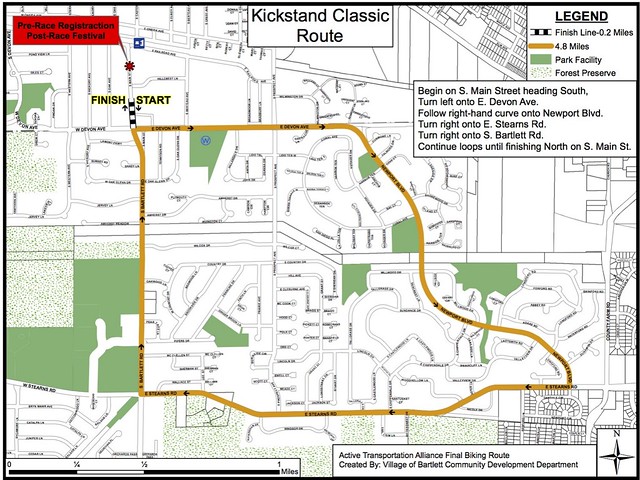 Likewise, Burke expects a modest turnout for the first Kickstand Classic, but hopes it will pick up speed in subsequent years to become a major draw, and perhaps inspire similar events in other parts of the country. “Just as recreational running events have brought more people to running, we’re hoping to have a similar effect for biking,” Burke says. “We’re hoping that as bicyclists do this they’ll say, ‘That was fun’ and want to do more. I believe someone who gets into road racing or recreational riding is more likely to ride a bike to the store or the train station.”

To ensure a safe and comfortable start for novice racers, the races will feature staggered starts, with participants wearing electronic chips to keep track of their start and finish times. The “Speed Demon Wave” of the race departs between 6:30 and 6:45 a.m. and requires racers to do four laps, or about 19 miles. Racers are expected to maintain an average speed of at least 15 mph, and it’s the only heat in which drafting (riding closely behind another racer’s rear wheel to minimize wind resistance) is permitted.

The big question this event poses is, why Bartlett? Burke says Active Trans originally wanted to hold the ride in Chicago in order to have a more centrally located event but was unable to get the city agree to a long route route on car-free city streets. While on-street criterium bike races typically involve much shorter course, Burke says his organization wanted to make sure the route was long enough so that there is plenty of space between riders and no one would get lapped. “We didn’t want it to be intimidating,” he says.

“We put out a call for proposals, sending a letter to almost every suburb,” Burke says. “Bartlett was by far the most enthusiastic, and they’ve been great to work with. The village manager, the village staff, and the police department are really excited and are getting the word out to residents.”

One challenge with holding this event, a fundraiser for a group that works to reduce car dependency, in Bartlett is that it will be a little tricky to get there on time without driving. But Active Trans is currently brainstorming ways to make it easier for car-free Chicagoans to participate.

While Metra accommodates bikes, the first Sunday Milwaukee District West train from Chicago to Elgin doesn’t arrive in Bartlett until 9:30 a.m., which barely allows for riding in the last “Sunday Funday” heat. The schedules of the adjacent Union Pacific Northwest line to Harvard and the Union Pacific West line to Elburn aren’t any more helpful.

Active Trans has arranged for a discount with Enterprise CarShare for race participants who want to carpool to the event.

Another option is to take a train out the day before and spend the night – the advocacy group has arranged a discount with a local hotel. If you choose this option, you might want to check out the BAPS Shri Swaminarayan Mandir, a beautiful Hindu temple located a five-mile pedal from the Metra stop. Active Trans may also organize a meet-up for ride participants in downtown Bartlett on Saturday evening, Burke says.

One more idea for getting to the race, which may appeal to rough-and-ready, early-rising Chicago bicyclists, would be to ride the 24-hour CTA Blue Line to the Rosemont station and then pedal 21 miles on roads to the starting line. After participating in the ride and post-ride fest, which will include a live band, food vendors, and a free New Belgium beer for racers, you could hop on a Milwaukee District West train, leaving every two hours, for a well-earned ride home.

Last Sunday was the maiden voyage of the Active Transportation Alliance’s Kickstand Classic, a combination race and fun ride to support the group’s walking, biking, and transit advocacy effects. Thanks in part to absolutely perfect weather, the event, held in the northwest-suburban village of Bartlett, appeared to be a big success, which makes it seem […]
A recent survey conducted for the Illinois Bicycle Transportation Plan found that Illinoisans want bikeways that provide physical separation from motor vehicles, and believe these kind of “8-to-80” facilities are a key way to get more people to cycle. Protected bike lanes and bike boulevards, AKA neighborhood greenways, are becoming commonplace in the city of […]
The new design of the eastern riverwalk is hostile to cycling, and security guards are ordering cyclists to dismount, although it's still legal to ride there.
It pains me to report there probably won’t be an Open Streets event in Chicago this year. Since 2005, the Active Transportation Alliance has been lobbying the city of Chicago to stage a ciclovía, a Latin American-style car-free event, in which the streets are opened for walking, biking, and other forms of healthy recreation. Various […]
The advocacy group points out that the riverwalk was originally conceived as a bike facility, but notes that congestion could be reduced by adding protected lanes to Upper Wacker.
On Monday, Governor Quinn’s Northeast Illinois Public Transit Taskforce released its final report, underscoring the need for better funding for regional transit. Yesterday, the Center for Neighborhood Technology and the Active Transportation Alliance launched a new campaign, dubbed “Transit Future,” to raise that money via a new Cook County-based revenue stream that would help the […]