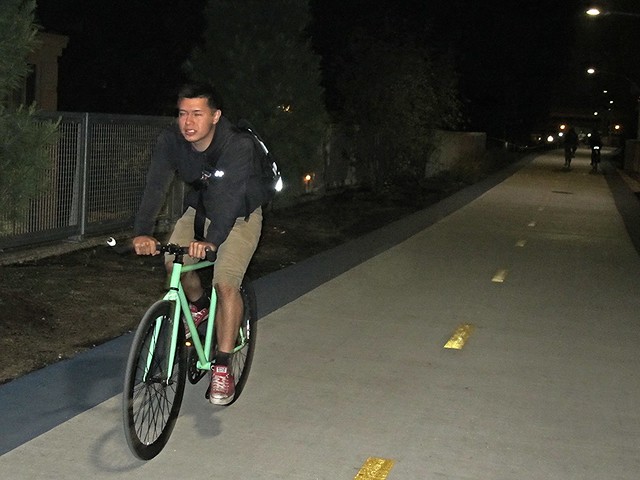 Last summer, a Chicago Park District spokeswoman told me that, according to the park district code, it’s legal to commute on the Bloomingdale Trail at all times of day. But in the wake of the mugging of a cyclist on the greenway last Friday night, the agency seems to have flip-flopped on the issue – a spokeswoman implied that the 2.7-mile facility is closed between 11 p.m. and 6 p.m. However, if it was open 24/7, that would improve safety because there would more “eyes on the trail.”

Some 80,000 people live within a half mile of the Bloomingdale, aka The 606, and many of these residents regularly bike commute home from work or entertainment after 11 p.m. It’s only logical that these people should be allowed to use this car-free route to get home safely, rather than take their chances with drunk drivers on busy North Avenue or Armitage Avenue.

Last June spokeswoman Michele Lemons told me that – as on the Lakefront Trail – nonstop walking and biking are permitted on the elevated path due to an ingress and egress provision in the park district code. “Persons and vehicles may pass through such parks without stopping on the more direct walk or driveway leading from their point of entrance to the exit nearest to their point of destination,” the code states. Lemons said this allows commuters to use paths through parks, including The 606, for transportation.

However, in practice, police officers enforce the city’s usual 11 p.m. to 6 a.m. parks curfew by clearing the Bloomingdale at 11 sharp. When they encounter people commuting on foot or by bike on the path after hours, they order the trail users to leave. Last summer Officer Janel Sedevic from Police News Affairs confirmed this is the department’s current protocol.

After I notified Sedevic and Lemons that the two policies were in conflict, they said they would get in touch with each other and resolve the issue.

On Friday at around 11:30 p.m., a 25-year-old man was biking on the trail near Kedzie Avenue when he was jumped and mugged by four males, DNAinfo reported. They pulled him off his cycle, beat him, and took his wallet, phone, before leaving the scene, according to police.

“I was biking home from work in Lakeview and took the trail because there were a lot of cars out, and I have ridden late at night before without incident,” the victim told DNA.

In the wake of the attack, park district spokeswoman Jessica Maxey-Faulkner indicated that it was illegal for the cyclist, as well as the assailants, to be on the trail at the time, referring to the fact that the parks are usually closed between 11 p.m. and 6 a.m. Therefore it appears that the park district and the police department are now on the same page. Unfortunately it’s the wrong page.

Unlike New York City’s popular High Line elevated trail, the Bloomingdale doesn’t have gates and it’s not locked at night. The 606 does have security cameras at each of its 12 access points plus cams at other locations where a bend in the trail obscures the view.

But an easy way to help prevent repeats of Friday’s assault and save work for the police would be to allow cyclists and pedestrians to legally commute on the trail all night, in keeping with the park district code. After all, as long as late-night trail use is outlawed, only outlaws will use the trail after hours.

This recent incident may discourage some people from biking home on the trail after 11 p.m. — the victim said he’ll avoid the trail at night from now on. But many people will continue to do so, because the path provides an alternative to sharing busy streets with drunk drivers. Legalizing this behavior would make it safer by providing more potential witnesses, which would discourage criminal activity.

Rather than shooing people off the trail who simply want to get home in one piece, the police could spend more time addressing serious crime issues. And more biking and walking trips on the trail would mean fewer traffic crashes on surface streets.

The only people who’d lose out in a scenario where The 606 is legal to commute on 24/7 are the would-be trail bandits.

The Bloomingdale Trail, aka The 606, is a 2.7-mile walking and cycling corridor that connects many destinations across the Near Northwest Side and intersects with several key bike routes. Some 80,000 residents live within a half mile of the path. As such, it’s a no-brainer that people should be allowed use it for commuting 24/7, […]
Some 80,000 people live within a half mile of the Bloomingdale Trail, aka The 606, the 2.7-mile elevated greenway that connects Humboldt Park, Logan Square, Bucktown, and Wicker Park. Many of these residents regularly bike commute home from work or entertainment after 11 p.m. It’s only logical that these people should be allowed to use […]
[The Chicago Reader recently launched a new weekly transportation column written by Streetsblog Chicago editor John Greenfield. This partnership will allow Streetsblog to extend the reach of our livable streets advocacy. We’ll be syndicating a portion of the column on the day it comes out online; you can read the remainder on the Reader’s website […]