While the Hyde Park and Washington Park neighborhoods are only separated by the large green space from which the latter community takes its name, they can seem a world apart in terms of resources and investment. The completion of the Garfield Gateway project, including the renovation of the Green Line’s Garfield Boulevard station, which sees nearly 475,000 passengers a year, represents a step towards changing that situation. The $43 million project was funded by a federal Transportation Investment Generating Economic Recovery grant.

“The newly remodeled Garfield Green Line station has created an iconic gateway to the Washington Park community and boosted the development that’s already occurring here,” said Mayor Rahm Emanuel in a statement. “By adding modern amenities and convenient features to this key station, we help promote further transformation of this neighborhood.” 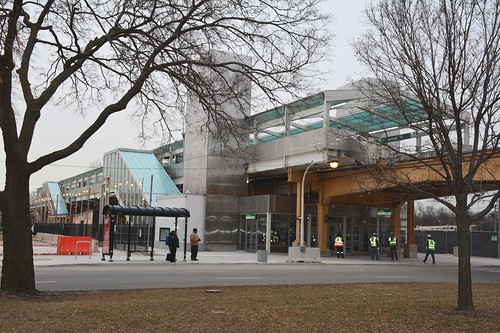 The project included extending the station’s platform canopies to provide more shelter; upgrading platform accessibility, improving elevators and escalators; and installing public art and landscaping. According to city officials the CTA exceeded its Disadvantaged Business Enterprise goals for the project with a minority hiring level of 63 percent, including hiring 21 percent the workforce from the surrounding neighborhood.

The Garfield station was originally built in 1892 for the 1893 World’s Columbian Exposition. It was designated as a City of Chicago landmark in 2001, and restored to its original turn-of-the century look by the renovation project. The old stationhouse, located on the south side of the boulevard and no longer used by CTA customers, was converted into a community space as part of the project. 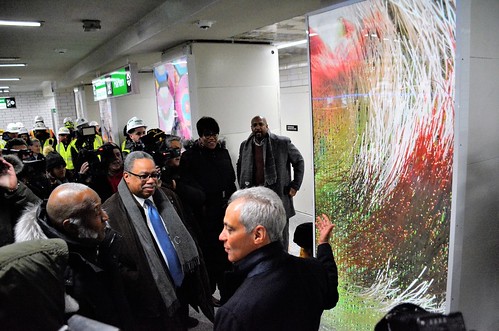 Renovations to the current stationhouse on the north side of Garfield included public art by Chicago artist Nick Cave (not to be confused with this guy), best known for his “Soundsuits,” which combine sculpture with performance art. Cave contributed designs for the stationhouse’s mosaic ceiling, fused glass platform windbreaks, and columns, and the exterior of the station’s steel elevator towers.

The gateway project includes extending the platform's canopies; elevator and escalator upgrades; and the installation of public art and landscaping.
Neighbors have launched an online petition demanding that the CTA restore Green Line service to Stony Island and the future presidential library site.
Today a spokesman for the Obama Foundation officially confirmed that the Obama Presidential Center will be located in Jackson Park on the South Side, and he lauded the project as the nation’s first urban presidential library. “For the first time, a presidential center will be in the heart of an urban community,” foundation chairman Martin […]
At the Elevated Chicago Symposium, community members discussed their efforts to harness transit-oriented development to improve the lives of lower-income and working-class residents.
[This piece also rain in Checkerboard City, John’s transportation column in Newcity magazine, which hits the streets on Wednesday evenings.] I don’t mean to sound pissy, but the Chicago Transit Authority is having difficulty keeping ‘L’ stop elevators urine-free. Some say it’s the agency’s Number One challenge. Like most Chicagoans who get around by rapid […]
Things Chicago has money for: •Rental bicycles •Dyeing the river green •A Ferris wheel Things Chicago doesn’t have money for: •Education — richie (@ohyoumeandaniel) June 2, 2016 Chicago residents have every right to be angry about the sorry state of the Chicago Public School funding. But don’t scapegoat the Divvy bike-share system, a bargain for […]