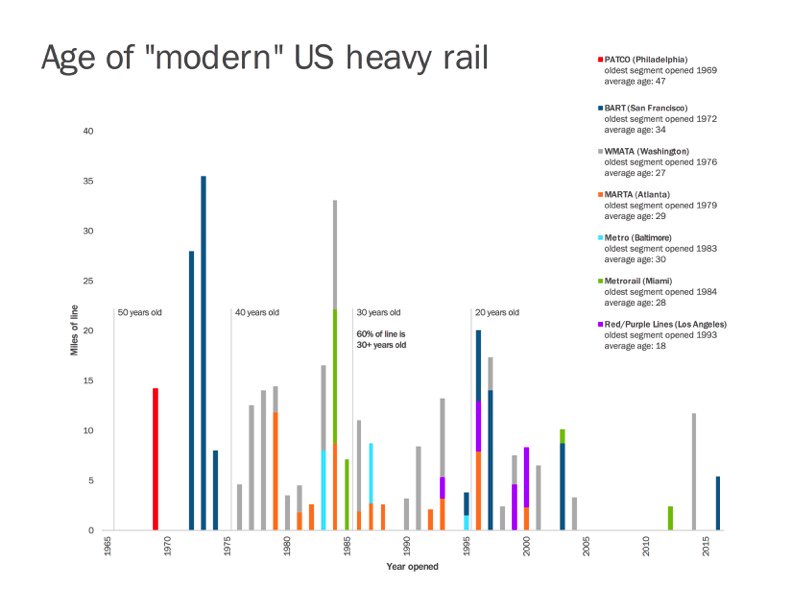 What should we make of the recent headline-grabbing service disruptions at Washington Metro and BART? This chart from Houston transit advocate Christof Spieler offers some important perspective.

These transit systems are reaching the age where maintenance needs are increasingly urgent. Alex Block at City Block writes:

BART, the snake digesting the mouse: Until seeing the data presented this way, I never appreciated how much of the BART system (navy blue on the chart) was built in quick succession in the early 1970s. The system didn’t add any route miles until the first phases of the San Mateo-SFO Airport extension came online starting in 1995. Contrast that to the history of WMATA (gray bars on the chart) regularly opening smaller system segments over a span of 20 years. MARTA also expanded by adding segments over the course of two decades.

The implication for maintenance is that BART is kinda like a snake digesting a meal — the bulge of maintenance needs/life cycle costs now coming due. WMATA has a similar length of track to maintain, but won’t have to deal with such a large portion of the system reaching mid-life at the same time.

End of Federal (Capital) Role: It’s hard to overlook the long-term trend as well — cities aren’t opening new third-rail, fully grade-separated transit systems anymore. There are only seven of these systems, most of which received substantial capital funding from the predecessor to the Federal Transit Administration, the Urban Mass Transit Administration; and there have only been a handful of expansions of these systems (absent federal funding) since 2004. Of those recent expansions, two are airport connectors (Miami and Oakland – and the other is WMATA’s first phase of the Silver Line, eventually destined to reach Dulles International Airport).

Limited federal funding, rising costs, and limited flexibility of fully grade-separated systems meant that capital spending shifted away from subways and towards light rail systems.  Even high capacity transit projects (such as Seattle’s light rail system) with substantial grade separation have opted for the flexibility of a light rail platform. Subway system expansion in the US is limited to regions locked into that technology.

Elsewhere on the Network today: Transport Providence makes the case for replacing the 6/10 Connector with a surface boulevard instead of an underground highway. Tim Kovach says a parking tax could be a smart answer to Cleveland’s transit funding crisis. And Mobilizing the Region points out a glaring flaw in how the Federal Highway Administration markets its National Household Travel Survey.

This week, rapid transit headaches in Washington, D.C. and the Bay Area highlighted the need for better maintenance of U.S. public transportation infrastructure. However, a new report from Chicagoland’s Regional Transportation Authority suggests that the CTA is in a little better shape than its peers. On Wednesday, the D.C. Metro system was completely shut down for 24 […]
The Regional Transportation Authority’s newest report, issued last week, compares the Chicago Transit Authority, Metra, and Pace, to their respective peers around the country. The report found that the CTA is efficient, relative to rapid transit systems in Atlanta, New York City, Philadelphia, Boston, and Washington, D.C. The RTA also compared Metra, using 2014 performance figures, […]
Metra, the regional commuter train operator, is seeking a consultant to develop “creative recommendations” on how to change its fare structure. The consultant would be in charge of finding the pros and cons of the current fare structure, comparing it to Metra’s commuter rail peers around the country, and building a model that allows Metra to […]
Local architect John Krause sees the reconstruction of North Lake Shore Drive, one of Chicago’s most scenic locations, as a chance to think big — not just about the road, but also about parks, transit, trails, the shoreline, and the future of the city alongside it. The Illinois Department of Transportation isn’t used to thinking […]
The RTA, CTA, Pace, and Metra leaders discussed challenges and opportunities at a Metropolitan Planning Council roundtable.
Today’s emergency 24-hour shutdown of the D.C. Metro system is a transit embarrassment of epic proportions. The shutdown follows an electrical fire in a subway tunnel Monday, and will allow for system-wide safety inspections. Metro has been under federal control following a smoke inhalation death caused by a similar problem last year. David Alpert at Greater Greater Washington wonders how the region’s […]