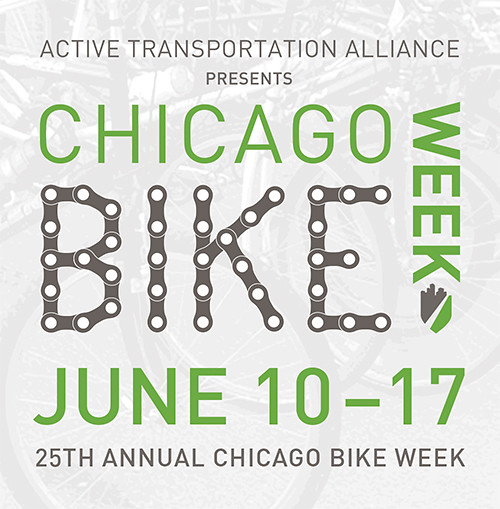 For the first time in a quarter-century, the Active Transportation Alliance, rather than the city, is putting on Chicago Bike Week, a full slate of fun events to promote transportation cycling in the region. “We’re providing the funding, producing the events, and involving the community partners,” says Active Trans marketing and events director Clare McDermott. “Basically, bringing it to the people.”

The advocacy group, previously called the Chicagoland Bicycle Federation, organized the city’s first Bike Week in 1991, but the city government has run the event in recent years. “The Department of Cultural Affairs and Special Events was not going to do it again this year, and it was something we wanted to see continue, so we are happy to be able to do it again this year,” McDermott said. According to DCASE spokesman Jamie Lundblad, the city decided not to stage Bike Week as a cost-saving measure.

The department is not producing any other bike events this year, McDermott said. “But, of course, [the Chicago Department of Transportation] will continue to promote biking,” she added.

It’s impressive that Active Trans is staging Bike Week so soon after their successful Bike the Drive fundraiser on May 29, which required a massive amount of staff and volunteer work hours. They don’t yet have a final figure for the amount of money raised, but an estimated 20,500 riders participated. “We had a great turnout this year,” McDermott said.

The centerpiece of Bike Week is the annual Bike to Work Rally, which takes place on Friday, June 17 at Daley Plaza, from 7-9 a.m. Typically the mayor or a CDOT representative gives a sort of state of the union address at the event, touting Chicago’s latest bike achievement. A free breakfast will be served to cyclist, and there will be giveaways such as this year’s Bike Week T-shirt and other goodies from 28 participating vendors and sponsors.

The Bike Commuter Challenge started today and runs all next week. Hundreds of companies from across the region are competing to see who can have the highest bike-to-work rate. Tips for newbie bike commuters are available at the contest’s website. “We want to make sure people have a good experience the first time, so they’re more likely to choose cycling as a fun, easy way of commuting,” McDermott said.

Tomorrow, June 11, from 6-10 p.m., the New Belgium Art Bike Program takes place at Galerie F, 2381 North Milwaukee in Logan Square. Although it’s not an official Bike Week event, New Belgium is Active Trans’ beer sponsor this year, and the proceeds from the event will benefit the advocacy group. The party will showcase work by local artist Sick Fisher, who created an art bike and a mural in collaboration with the brewery. Tickets are $15, including beer samples, a raffle ticket, and New Belgium schwag.

The Two Wheels, One City Ride takes place on Wednesday, June 15, at 6:30, leaving from Blackstone Bicycle Works, 6100 South Blackstone in Woodlawn. Slow Roll Chicago leads the ride, which highlights the diversity of the city’s neighborhoods, and cyclists of all backgrounds are encouraged to participate.

On Saturday, June 11, from 12-4 p.m., The Schubas Bike Bash takes place outside the bike-friendly Lakeview music venue, 3159 North Southport, which has plenty of parking racks and a Divvy station out front. The local band Parent will perform, and they’ll be holding a Bike Strut Competition, where the owner of the best-decorated cycle will win a summer pass to Schuba’s and its sister venue Lincoln Hall.

Last but not least will be Chicago Bike Week’s Wrap Party, hosted by New Belgium on Saturday, June 18, from 12-3 p.m. at the Chop Shop, 2033 West North Avenue in Wicker Park. There will be a DJ and a dance floor, and if you wear a groovy biking outfit to the event, you could be selected to participate in a fashion show. Click on the above link to RSVP.

All of this partying has a purpose, McDermott says. At commuter pit stops and at the rally next Friday, the group will be asking cyclists to support their Bikeways for All campaign, which calls on Chicago aldermen to support the construction of low-stress bike lanes and neighborhood greenways that are suitable for riders of all ages and abilities. Residents will be able to send a letter to their local rep, and if they take a photo with a Bikeways for All banner and share it on social media, they’ll be registered to win prizes.

“Chicago Bike Week is a great way to celebrate how much progress has been made for biking in Chicago, and also to have a platform to spread the word about the advocacy work Active Trans does,” McDermott says.

It pains me to report there probably won’t be an Open Streets event in Chicago this year. Since 2005, the Active Transportation Alliance has been lobbying the city of Chicago to stage a ciclovía, a Latin American-style car-free event, in which the streets are opened for walking, biking, and other forms of healthy recreation. Various […]
The Active Transportation Alliance has a long history of advocating for the rights of bicyclists, and occasionally they do so via direct action. A case in point was a recent incident in which an Active Trans helped reconnect a bicyclist with her ride after it was unfairly confiscated by security outside the American Medical Association […]
It’s tempting to be cynical about the Active Transportation Alliance and AAA Chicago’s new “same rights, same responsibilities” campaign, promoting safe behavior by people on bikes and people in cars. After all, cyclists and drivers don’t really have the same rights yet. Despite the growing Complete Streets movement, our nation and our city’s transportation systems […]
The advocacy group points out that the riverwalk was originally conceived as a bike facility, but notes that congestion could be reduced by adding protected lanes to Upper Wacker.
Last week at a press event celebrating the installation of 103 miles of buffered and protected bike lanes, Mayor Rahm Emanuel promised to build 50 miles of new bike lanes, including PBLs, over the next four years. The Active Transportation Alliance’s new “Bikeways for All” campaign, launched on Monday, urges the mayor to double that goal. In […]
The “Commuter Challenge” is an annual competition held in many cities, in which companies compete to get the most employees to bike commute during Bike to Work Week in June. It’s a good opportunity to start converting people who are “interested but concerned” about biking for transportation into regular bike commuters: Workplaces host events on how to […]