More Women Signing Up for Divvy, But Not Necessarily Riding

35.7 percent of annual Divvy subscribers identified themselves as women as of the end of August. This is the highest it’s been since Divvy started selling memberships in May 2013, and well above the low of 30.4 percent in July 2013.

Women made 27 percent of Divvy subscriber trips in August. That’s also an increase from 21 percent during the previous reporting period (June to December 2013), but considerably less than the sign-up rate.

Surprisingly, the percent of Divvy trips made by women is still slightly lower than the 28 percent of Chicago bike commutes made by women. Divvy is convenient for non-work trips, which constitute a higher proportion of the trips that women make nationally – 86.2 percent, compared with 82.4 percent of men’s trips.

In addition to tracking the current share of members by sex, Divvy also tracks new member sign-ups by sex. Women accounted for nearly half of memberships activated in February and in July, coinciding with the deadline to activate discounted memberships purchased via a Groupon promotion, and with the promotion of June (also Bike To Work Month) as the first “Women’s Bike Month.” 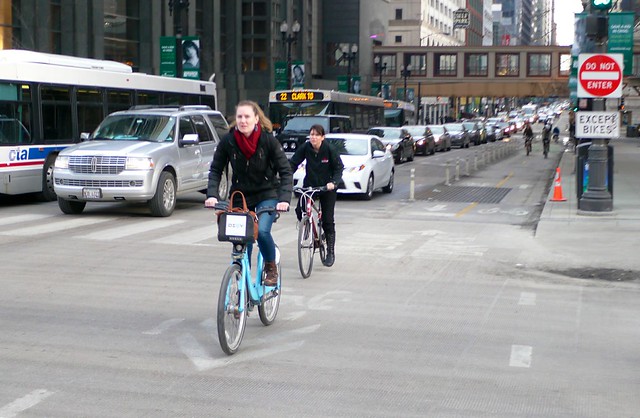 The steady rise in new female members correlates with women’s increasing share of Divvy trips. Over the 13 month period, women made 20 percent of Divvy subscriber trips, but in July 2014 women made 27.5 percent of member trips.

Organizations around the country and locally are seeking to increase the share of women who bike. When women bike, families are more likely to bike, and women’s comfort with biking is one good indicator as to whether Chicago is doing an adequate job of building bike infrastructure that welcomes a wide range of potential users.

In other cities, the gender gap is smaller among bike-share users than among bicycle commuters. In Washington, D.C., which launched the nation’s first large-scale bike-sharing system 3.5 years ago, a majority of bike-share subscribers are women, and bicycle commuting among women has increased from 1.0 percent in 2007 to 2.5 percent in 2012.

Promotions like discounted memberships and encouragement events seem to help bump up the number of women riding bikes. This month, Divvy will announce a discounted, $55 membership for college students. Greenberger also said he is planning fall promotions and partnerships, and will repeat Women’s Bike Month next year.

Last Friday, Divvy eclipsed Capital Bikeshare in Washington, D.C., to become the second largest bike-share system in the United States. Today we become the 2nd largest bike share system in the US. Ride on, Chicago. #DivvyBikes #EnjoyYourRide #bikeCHI — Divvy (@DivvyBikes) September 20, 2013 Divvy riders have collectively pedaled over 1,100,000 miles since the first trip […]
Divvy’s data release last month raised as many questions as it answered about bike-share use in Chicago. Chicago Spectrum was the first to point out that there’s a large gap between male and female Divvy members. Women make up 31 percent of the membership, but the trip data showed that women made only 21 percent […]
Steven Vance is the self-described “data geek” at Streetsblog Chicago, but even a right-brained type like myself couldn’t help but be intrigued by some recently revealed stats and charts about Divvy bike-share use patterns. Chicago Department of Transportation Deputy Commissioner Scott Kubly shared them during a talk at last week’s Complete Streets Symposium, hosted by […]
Imagine if almost everybody who rode the Chicago Transit Authority, a public transportation system subsidized with taxpayer money, was Caucasian. Denver found itself in an analogous situation last year, when a survey revealed that, in a city where almost half of residents are people of color, 89.9 percent the people using the publicly funded Denver […]
Last week CDOT released data for all Divvy trips taken by members and 24-hour pass holders in 2013, and the agency is looking for the public’s help in uncovering any patterns. The data includes the station where the trip began, the station where it ended, start time, end time, and whether the user had a […]
Divvy is Also Raising Day Pass Price to $15, Allowing Pass Holders to Take 3-Hour Rides